Discover all the hidden gems of the Netherlands with this itinerary. You’ll be amazed by the great things this small country has to offer alongside windmills and tulip fields.

Travel times in the Netherlands are short and trains run frequently to every corner of the country. You can hop on any Dutch train you like when traveling with a Eurail Pass. Try the Eurail Benelux Pass, which lets you travel in the Netherlands, Belgium and Luxembourg.

Cities visited on this trip: 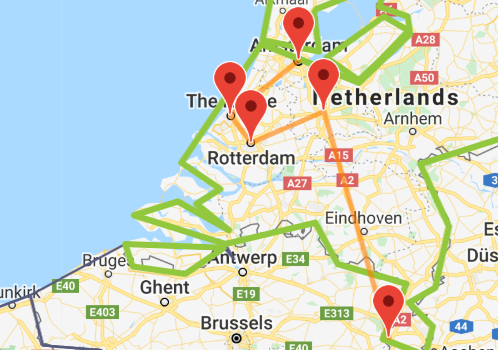 Amsterdam is the beating heart of the Netherlands, and has been so since the Dutch Golden Age. Reminders of the city’s glorious past can be found everywhere, from the Royal Palace on Dam Square to the magnificent collection in the Rijksmuseum. Take a stroll along the historic Canal Belt and visit the Anne Frank House, where Anne and her family hid during World War II.

Amsterdam’s attractions are numerous and extremely varied. The famous Red Light District draws millions of visitors every year, but so does Keukenhof - one of the world’s largest flower gardens, which is only an hour away from Amsterdam. Other highlights include the Van Gogh Museum and the Amsterdam Stock Exchange, established in 1602, making it the oldest in the world.

Take a trip to the city of Haarlem and make sure you try a local Jopen beer. It’s only 15 minutes from Amsterdam by train.

From Amsterdam to The Hague

The Hague, the Netherlands

The city of The Hague is the seat of the Dutch government and parliament. Have a stroll around the 13th century Binnenhof to watch politicians arrive by bicycle, or check to see if the king is working in the Noordeinde Palace. Visit the Mauritshuis to see the works of Dutch Golden Age painters like Rembrandt van Rijn and Johannes Vermeer.

The Scheveningen district in The Hague is a popular beach resort, good for both swimming and surfing. Take a tour of the Peace Palace (Vredespaleis), where the International Court of Justice is housed, or visit a charming miniature version of the Netherlands in Madurodam.

Hop on the train to Leiden, the oldest university city in the Netherlands. It’s only 10 minutes from The Hague by train.

From The Hague to Rotterdam

Rotterdam is the largest cargo port in Europe and goes by the nickname ‘Gateway to the World’. Its skyline is a unique sight in the Netherlands, with tall skyscrapers and architectural landmarks like the Cube Houses and the Market Hall. Rotterdam’s modern look is the result of heavy bombings in World War II, which completely destroyed the old city center.

More notable structures include the Erasmus Bridge and Rotterdam Centraal, the brand-new railway station. To get an impression of what the city looked like before the war, take a walk through the Delfshaven borough. Visit the nearby Boijmans van Beuningen museum for Dutch art from all eras. And if you’re into music, get tickets for North Sea Jazz in July. It’s the biggest indoor jazz festival in the world.

Go to the historic city of Delft to see the canals and the ‘Old John’ church. It’s less than 15 minutes from Rotterdam by train.

From Rotterdam to Utrecht

Utrecht is one of the most beautiful cities in the Netherlands. Fall in love with its ancient city center and the Old Canal (Oudegracht) that runs through it. Have a drink on one of the charming terraces at water level or climb the 368 feet high (112 meters) Dom Tower for a stunning view of the city.

In this lively student city, you’ll find music, art, and festivals around every corner. For concerts of all genres, go to TivoliVredenburg. To learn more about Utrecht’s history as a religious center, visit the Museum Catharijneconvent. And if you like architecture, don’t miss out on the famous Rietveld-Schröder House.

Stop off halfway between Rotterdam and Utrecht to visit Gouda and its famous cheese market.

From Utrecht to Maastricht

In the far south of the Netherlands you’ll find the city of Maastricht, located on a crossing point on the Meuse (Maas) river. Founded in Roman times, Maastricht has a great deal to offer in terms of culture. Not to be missed is the Treasury of the Basilica of Saint Servatius (St. Servaaskerk), housed in the country’s oldest church, and the modern Bonnefanten Museum with its paintings and medieval art.

The greatest thing about Maastricht though is its magnificent city center, with medieval remains such as the old town wall and Hell’s Gate (Helpoort), the oldest gate in the Netherlands. Go for a drink on the Vrijthof or one of the many other lively squares.

Visit romantic Valkenburg for a combination of castles and caves. It’s just over 10 minutes from Maastricht by train.

Discover the Netherlands with Eurail!