Trains are the perfect way to travel in Spain. The country is filled with lively cities, cultural curiosities, lovely beaches, and great food. Your Eurail Spain Pass is your ticket to amazing rail adventures, from the Sierra Nevada mountain range in Andalusia to the unspoilt beaches of the Costa Brava.

Spain has an extensive high-speed train network, which will get you where you want to go a lot faster compared to the regional train system. However, for the high-speed trains you'll need to book a seat reservation. We'll explain you more about reservations a bit further down on this page.

International connections from and to Spain

We suggest the following routes to travel between Spain and other European countries:

International ferry connections to and from Spain

You can also travel between Spain, Italy and Morocco by ferry with Grimaldi Lines ferries. Get a 20% discount on the following routes:

Reservations for trains in Spain

Many Spanish trains require an advance reservation, including domestic and international high-speed trains and night trains (prices depend on your chosen sleeping accommodation or seat type). You can make reservations up to 3 months in advance.

Please note that the number of seats available for Eurail Pass holders is limited on InterCitè de Nuit trains. We advise you to reserve these trains as soon as possible during peak season (May to September) and public holidays.

How to make reservations for Spanish trains

You can make reservations for domestic and international high-speed trains and night trains:

If you have a disability or reduced mobility and you want to travel by train in Spain, you can request help from Atendo Service. You can contact them by phone:

Find out more about reservations

There are various train types in Spain ready to transport you both day and night. Most of the Spanish railway network is operated by RENFE. Use the Eurail timetable to check times for trains in Spain.

Regional and intercity trains in Spain

The main rail network in Spain is made up of the following regional and intercity trains:

On the Eurail timetable Media Distancia trains appear as "IR". Reservations are required for most of these trains. Cercanías trains do not appear in this timetable. Check the Renfe website for more information on departure times. 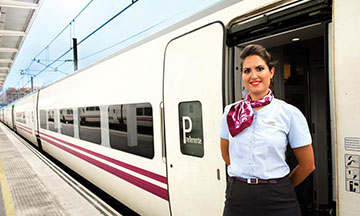 These high-speed trains operate to and from Spain:

Spain's extensive high-speed train network is operated by modern trains that offer you high quality service during your Eurail trip.

These high-speed trains operate within Spain:

On the Eurail timetable high-speed trains appear as "IC", "ALT", "ALV" "AVE", "A" or "EM". These trains always require a reservation. 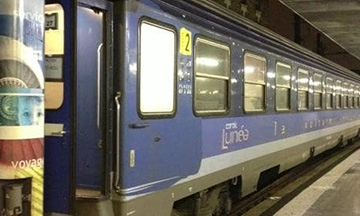 Sud Expresso trains appear on the Eurail timetable as "310", Lusitania as "335" and InterCités de Nuit as "NT". You're required to book sleeping accommodation in advance.

Spend your whole vacation to discover Spain by rail.

Have the freedom to visit Spain and up to 32 other Eurail countries. 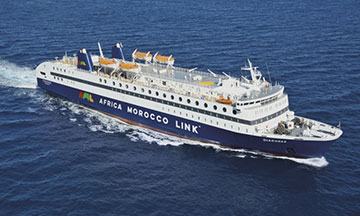 Discounted ferry travel is an extra benefit of Eurail passes that are valid in Spain.

Get discounted ferry travel between Spain and:

Eurail pass holders can also travel for free (pay only a reservation) on these international bus routes:

See all pass benefits for Spain

Places to visit in Spain Known for its modern, forward-thinking style, Barcelona is one of the most progressive cities in Spain. The capital of Catalonia offers music, museums, sun and shopping. A popular attraction is Sagrada Familia, a temple designed by Antoni Gaudi. Its construction began in 1882, and is still underway. Gaudi’s influence is unmissable in Barcelona – from Park Guell to Casa Batlló, one of the most unique residences in Spain.

It’s easiest to get to Sagrada Familia by bus or subway from any major railway station. The temple has its own stop. Centuries of style in Seville

Seville (Sevilla) captures the sexy Spanish lifestyle, but business and finance are also part of the mix. Tour the city on foot, by bus or by bike. Parque de María Luisa and Plaza de España give a taste of Seville’s nature. The Sevilla Cathedral gives a feel of the Muslim and Christian influence. A steamy nightlife, flamenco dancing and delicious tapas, completes the adventure.

Seville train station Santa Justa is about a mile northeast of the city center. Want to see some of the smaller, more quaint Spanish towns? The coastal city of Bilbao offers the famous Guggenheim Museum, designed by architect Frank Gehry and recognized as a work of architectural genius. Further south, Pamplona may be known for the Running of the Bulls (July 6-14), but for the rest of the year, this little town is a fabulous place to explore, eat, and enjoy a dazzling nightlife.

From Station Bilbao-Abando, you can take a subway directly to the Guggenheim Museum. The museum has its own subway stop. Bask in the sunlight along the Costa Blanca (the White Coast) before heading into town for some memorable sightseeing. Once in town, don’t miss the Ciudad de las Artes y las Ciencias, which contains an oceanic aquarium, scientific museum, IMAX theater, covered gardens & more. Want to do a bit of shopping? The more than 1,000 stalls at the Mercado Central offers a host of colors, scents and flavors for the modern shopaholic. Madrid has so much to offer, you shouldn’t be surprised if you forget to sleep. Spend your days in the Plaza Mayor, the Royal Palace (Palacio Real), the Royal Botanical Gardens (Real Jardin Botanica) or one of the 73 museums. Feast on tapas in the evening, and dance the night away in one of the countless nightclubs that make this city famous. All the while, you’ll be surrounded by some of the most fascinating architecture in the world.

Spain's main hub stations are Madrid Puerta de Atocha, Barcelona Sants, Irun and Portbou. At these train stations, it's possible to connect to trains to Spain's main cities and many international destinations.

Stations in Spain usually have excellent facilities, often including:

On Spanish train timetables and at train stations in Spain, you'll usually find the local spelling of Spanish cities and stations.

Here is the local spelling of some popular Spanish cities: 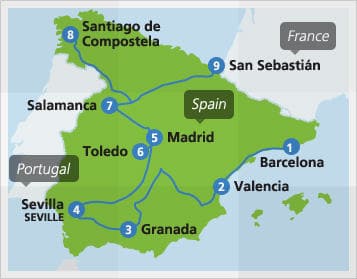 Map with example route in Spain

Visit Spain's most popular cities on a single trip with Eurail. You can follow the suggested route below using a Eurail Spain Pass - 8 days within 2 months, starting from € 301.

Valencia offers a charming old town, pleasant beaches and of course, the best paella Spain has to offer.

Granada is spellbinding thanks to the allure of the Alhambra set before the mountainous backdrop of the Sierra Nevada.

Seville – wander the winding cobbled streets of the Andalusian capital and include visits to Seville Cathedral and the Alcázar.

Madrid has plenty to offer – get lost at the Rastro flea market, explore the Prado Museum and soak up the lively atmosphere of Chueca.

Toledo is a stone’s throw from the capital and offers a rich history with churches, synagogues and mosques stood side by side.

Salamanca is buzzing with a student atmosphere and dressed up in beautiful traditional architecture.

Santiago de Compostela – is filled with Medieval charm and is the finishing point for pilgrims walking the Camino de Santiago.

San Sebastian proudly boasts some of Spain’s most beautiful beaches – ideal for sunbathers and surfers alike.

For more route ideas for your Eurail trip, check out our European highlights itinerary. Switzerland By Train
Your order
{{translatedName}}